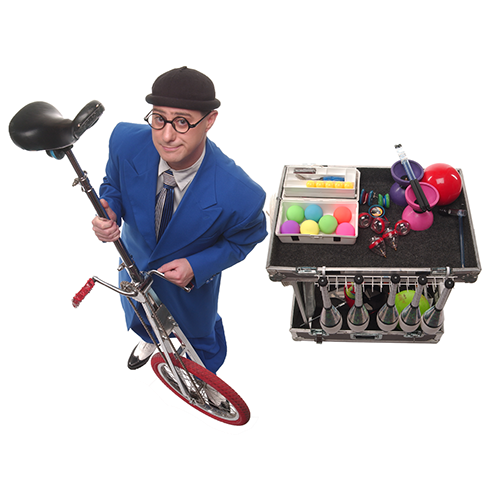 Reid Belstock began juggling at the age of 15, as a way of overcoming gross and fine motor skill impairment. After one year of juggling, Reid began his first performing opportunity at Elitch Gardens, a local Amusement Park. From the very first show, he knew it was a calling.  During High School Reid's Guidance Councelor handed him a brochure for Ringling Brothers and Barnum & Bailey Clown College.  It was a moment that proved to be spot on.

As a student of the famed Ringling Brothers and Barnum & Bailey Circus Clown College, Reid found a balance between his love of object manipulation, and slapstick comedy, and spent six months training at Walt Disney World Orlando perfecting his comic blend with the Entertainment Arts Festival in 1992 with Director Lloyd Brant.  More than 20 years later and over two thousand live performances Reid has been featured in Theaters, Cruise Lines, Variety Festivals, and Corporate Events both Nationally and Internationally.

Reid's work can also be seen as part of SMIRK.